Minimalism has been a hot topic since Marie Kondo’s Netflix special a few years ago. I personally never watched it but I know it impacted and inspired a lot of people to declutter and in general, just own more stuff.

Any time people are inspired to own less, I get excited! We live in such a consumer-driven world that is constantly telling us we need the next new thing.

Other than the obvious problems with owning too much like lack of money and too much clutter, the things we own actually have a negative impact on our environment. And I’m not just talking about plastic and single-use items.

Anything that we own and don’t actively use is a waste.

This is why you see a lot of environmentally conscious people lean towards minimalism or simply trying to own less.

The two don’t always, but often go hand in hand. Of course, there are so many reasons why people decide to become more minimal. From wanting to save money, wanting to be tied down less, or wanting to help the planet.

Not sure if you could be a minimalist? Read How to know if minimalism is right for you.

How minimalism benefits the planet:

Eventually, everything finds its way to a landfill. Maybe not in our lifetime, but some of our things may outlive us and end up in a landfill after we’re gone.

We all know that the landfill is the last place anything should be ending up. Even food and natural materials can’t break down in landfills because there’s not enough air.

Read: How to reduce food waste

And if these things aren’t breaking down, they’re just sitting and rotting and polluting our water and air. Neither of which are beneficial to the planet.

Whenever you purchase something new, whether it’s made sustainably or not, resources are being spent to make that item.

While a sustainably made pair of jeans may only need a mere fraction of the water to make than their non-sustainable counterpart, it’s still water that’s being used.

If you didn’t need those jeans that would be a little extra water saved! I’m not saying you shouldn’t buy something sustainably made, I’m just saying to buy things on a need-to-have basis to preserve water and energy and our planet.

Being a minimalist is basically only owning what you need and what you use instead of excess items. If you’re overbuying, (even responsibly made items) it’s wasting resources.

Which is why I always recommend purchasing second-hand first if possible. For clothes, electronics, furniture, etc.

The resources have already been spent to create those items, they already exist on this planet so there’s no need to create more demand and waste for a new one.

We’ve seen this with animals that have gone extinct.

By using man-made resources that aren’t recyclable or reusable or renewable could eventually lead to the depletion of these resources.

Even non-man-made resources like water. We’ve been told how important it is to preserve water and for good reason. We don’t want it to diminish.

Owning less of these un-sustainable items preserves resources that are finite and might not always be around.

In my opinion, consumerism is the root of all evil. And the action of buying and “needing” certain things has been engrained in our minds from the time we’re very young.

I truly believe that our world would not be in the environmental state that it is today if it weren’t for consumerism. Fast fashion wouldn’t even exist without the insanely high demand to buy more!

We as consumers set the demand for how quickly we need things. This means brands have to work fast, mistreating, and underpaying workers, using synthetic materials, and harmful toxins to create products. Not to mention the waste of water, other resources, and energy.

Buying less combats this. If we slow our rate of consumption, buying fewer things, the rate at which things are produced will also slow. Which will not only save lives but also help to preserve the planet.

Read: How I went from a shopaholic to slow fashion advocate

A lot of minimalists are opting for smaller houses. A smaller house means less space to fill with clutter. But this also impacts the planet in a positive way too.

Smaller houses require less energy to cool and heat them. They also use a fraction of the lighting and water that big houses use. Not only does this save you money but it also reduces CO2 emissions which prevent air pollution.

How to become a conscious consumer

These were just 5 ways on how minimalism benefits the planet. In fact, I can’t think of a single way minimalism doesn’t benefit the planet.

If you love the planet then I seriously consider giving minimalism a try. The two work together so seamlessly! But that’s not to say that you can’t own some items just for fun. Most minimalists don’t buy physical books anymore but read or listen to them online. I love the feeling and the smell of a physical book and I don’t plan on stopping buying them.

I don’t think there’s a way to be perfectly minimal or perfectly zero waste. But I believe a real effort at both makes an incredible difference! 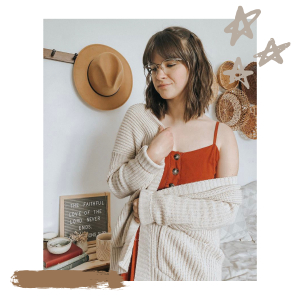 receive sustainable living tips and exclusive content straight to your inbox every week!

We got out engagement photos back from the talente

An over simplification of the process clothes go t

Normally, lush to me has always been bath bombs an